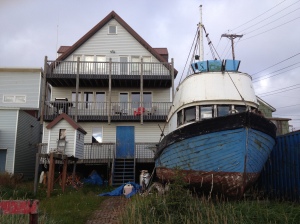 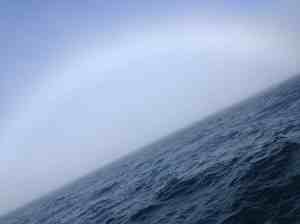 11 th of September Nome.
Entering Nome Harbor you immediately get the impression of a busy place. A couple of years ago Nome was a sleepy outpost in the southern Arctic of Alaska. But things have changed since since the TV documentary series about gold diggers here started. Before that only a handful of dredges were established in Nome but now there are over 200 registered dredges. It is like back in the late 19 th century when people came from all parts of the world to seek their luck in Alaska. In the harbor you see them everywhere – small pontoon dredges up to really big and advanced ones. The gold diggers – mostly men, often recklessly dressed, bearded, heavily smoking looking like trolls. Hair sticking out wildly under the cap. Rugged faces. According to the Harbor Master the city of Nome has great difficulties keeping up with the boom. They are remodeling the harbor facilities to be able to receive bigger cargo ships and tankers. Another thing illustrating the growth is all the bars and restaurants along Front Street and not to forget the liquor stores, gold buyers and souvenir shops.
We started our celebration of the completed North West Passage onboard Libellule, safely moored at the south wall. At 1830 Nicolas and Marco from Perd pas le Nord plunged in with some bottles of wine. Their North West Passage was about to end with a catastrophe near Point Barrow – they hit a sandbar and struggled for 24 hours in the storm to get their ketch loose but finally they gave up and got evacuated with helicopter. After four days in Point Barrow they returned to their boat on a tugboat that was capable of pulling them loose and eventually they managed continue sailing to Nome. They intend to haul their boat and put it on the hard over the winter in Nome.
At 21 we went to Bering Sea Restaurant to have some steaks and pitchers of Alaskan IPA. After being properly fed with New York style steaks and fries it was time to explore the bar culture. All the bars we visited seem to compete in tallest bar desk. At one bar the baldheaded female bartender was running back and forth along the 10 meter desk handing out drinks, jokes and encouraging comments to the not so sober guests. And of course loud rock music on the PA. Atmosphere was good. Next, Breakers Bar, a combination of Lotto boutique, snooker lounge, Laundromat and bar. A woman won 250$ on the Lotto and bought us all drinks. Two crab fishermen, slightly refreshed, were playing pool and imitating the Swedish chef from the Muppet Show when they found out I was Swedish. The balls were jumping out of the pool table – oops! Kavit the chef from Airport Pizza, a successful restaurant in Nome, presented himself and we had a chat. Two gold diggers showed me an iPhone picture of their last four days harvest – and it looked like a lot of gold nuggets. They told me they made over a million bucks last year.   At 0200 all the bars close and everybody are out in the street at the same time. Outside Brakers we met Sheila, Andrew and Arlo. I met Sheila earlier at the souvenir shop with carvings. So the party continued at Libellule. Arlo Hannigan brought his guitar and we had a jam session onboard. He is a musician and sounds like a mix of JJ Cale, Dylan and a dash of Cohen. Our playing styles fitted together and I tried his Martin guitar. I played my Baffin Bay Waltz and he followed and he played some of his songs and I followed. Outside it was raining heavily and the party went on until 0430. That was a proper celebration of our journey though the morning after felt a bit heady.  Philipp and Michael left the boat to catch their flight back to Europe and Yves, Sylvain and I motored out of Nome Harbor in the rain. Nicolas and Marco from Perd pas le Nord waved farwell at the dock.